We are almost finished with the February Freeze!

Here in North Louisiana, many have been without water for days.  Our friends Ricky and Teresa have been collecting snow to use to flush toilets. I wonder how long Texas will continue to be in crisis mode.  It is difficult to imagine how awful this week in Texas has been or how long it will take to recover. 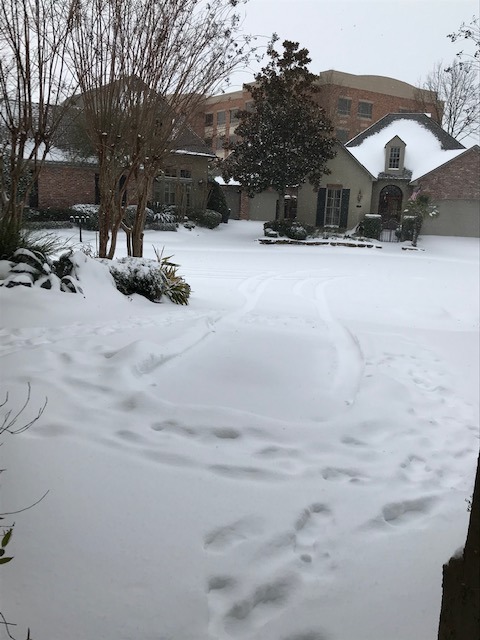 Those of us in the South are unaccustomed to temps as low as 1 degree, actually even getting in the teens is rare, but at least our electric grid was mostly fine--nothing like the catastrophe in Texas.

A spark of joy for me has been the birds.  They were fighting over the feeders, so I was throwing out seed on the snow and watching the invasion of birds bobbing and tracking all over the garden.  All the usual suspects are present:  cardinals, sparrows, finches, thrush, chickadees, robins, doves.

A special delight for me has been the red winged blackbirds.  We have only rare visits from the redwings over the years, and now there is no way to even count them; they cover the snow and the tree limbs.  They aren't bullies like the doves, but they do fuss on the feeders. So solemn in their appearance, especially in contrast to the snow, but when they fly, that flash of red and yellow on the wings makes me smile.

The cats and I have been watching out the windows at the birds, looking out and enjoying the melee-- like one of those cat apps that people have on their phones or tablets to entertain bored felines.  Belle, Fee's office cat, is also present.  Since he's not going to the office, he had to bring her home and Belle is forced to visit her inferior fellows.  Edgrrr ignores her, but she and Stinker got into frequent hissing matches the first day or two when she went around investigating her new surroundings and grabbing window space.

At present, the yard is covered with snow which is covered with a slick of ice, and I can't get out to the feeders to refill them without risking a broken limb. I'll get to it this afternoon as things melt a bit, but early this morning we were having a new (for me) phenomenon:  freezing fog.

Having to boil water before using it might be annoying if we weren't all so grateful to have water to boil.  Family and friends don't all have that privilege.

It has been beautiful, dangerous, and in many places tragic.